“I’m Picking Out a Thermos…..For You”

Steve Martin sang the thermos song to Bernadette Peters in the classic comedy, The Jerk.  He told her sweetly that he was “picking out a thermos…for you…..not an ordinary thermos…for you.”  He meant it as a song of love, and I am sure that he knew, like most people my age or older know, that a thermos is a pretty darn handy thing.

Hot drinks…cold drinks…soup….or even water.  And a reusable cup right at your disposal!

The item that we call a thermos is actually called a vacuum flask and it was invented by Sir James Dewar in 1892.  But poor Dewar was  a bit of a slacker and he did not patent his fine invention.  So in 1904, the Thermos Corporation snatched up the patent.  And while we feel sorry for poor old Dewar….can you imagine calling your Thermos………a Dewar? Nope…..me neither.

A few years ago, when it was back-to-school time and I was shopping for a new lunch box for my son Jake, I was disappointed that not a single lunch box came with a thermos.   And additionally, there were NO thermoses (or thermosi, as Jake has coined) available in the section with the kids lunch boxes.

It seems that disposable juice boxes and juice bags with their individually wrapped mini-straws have replaced the thermos.  But those drink pouches and boxes come with a lot of packaging that is heading straight for a landfill.

For those of you middle-agers….do you remember the excitement of shopping for your new lunch box every fall?  I am of the generation of the aluminum lunch box with a metal clasp that was covered with images of the most popular Saturday morning cartoons.  I had one with images of  Scooby Do0 and the Mystery Machine and another with Snoopy as Joe Cool.   In 1976, I got a special Bicentennial lunch box with comic cartoon depictions of Ben Franklin and our Founding Fathers.  American history combined with a funky lunchbox….Man, was I cool!

And back then, every single lunch box came with a matching thermos.

Most days, my lunchbox held a thermos of milk, a sandwich, and a piece of fruit.  On special days, though, my mother packed me TWO thermoses.  One with cold milk and one with warm tomato soup….plus a metal spoon that I was sure to bring back home.  I saw those two-thermos lunches as a special treat.  Now that I am a mom,  though, I recognize the telltale sign of a household that was out of bread…….boy, my mom was slick!

But while the thermos was a back-to-school necessity in my day, you rarely see a kid with a thermos nowadays.  The thermos has been set aside by kids and is now seen mainly in the hands of the rugged marlboro man in a hard hat on a construction site or road crew.

But today, I dragged Jake along on a thrift shopping spree.  And to my surprise, he picked out a thermos!

I praised his choice and we talked about the masses of trash and waste that come from individually packaged drinks and we also talked about what school lunches were like in my youth, when there was very little prepackaged foods available.  Jake noted that he likes the purchased school lunches, so he won’t be switching to home packed lunches just yet.  But he joked that he might just keep his industrial sized thermos in his locker for quick sips of hot cocoa between classes!

But maybe I can convert him to the home-packed lunch in time…..I need to get on Etsy or EBay and see if I can find him a Scooby Doo or a Joe Cool  lunchbox! 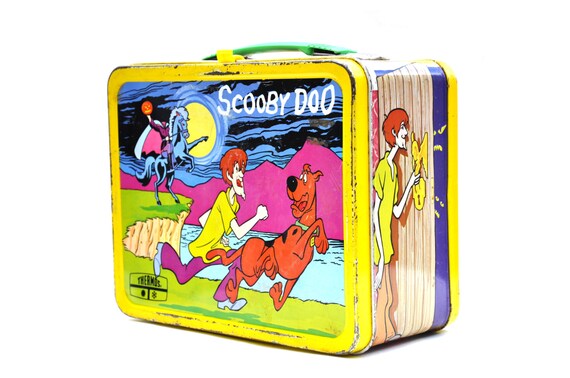 This is a bit different from the one that I had as a child. But it is pretty close! 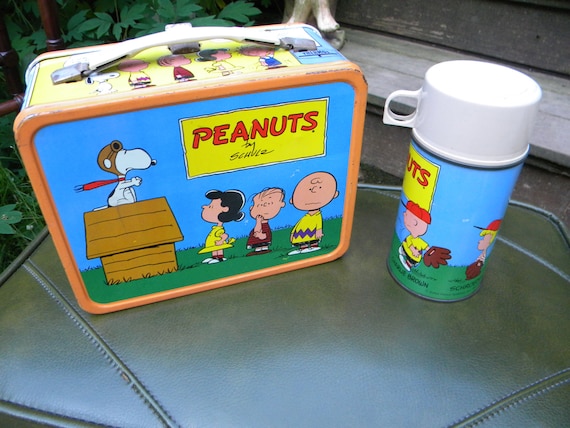 Also not the same as mine…but still cool!

Jake and his one dollar Thermos! Life is good!

And fyi – the lunchboxes pictured above and lots of other vintage lunchboxes are actually for sale on Etsy….just click on the pictures to be linked to the site.

Lisa has two active blogs on Wordpress. Views from the RoofTop started as a blog space to share about crafting and using repurposed materials to make useful housewares and about my craft shop's mascot, RoofTop Chalie, the repurposed racing greyhound. It has evolved into a space to also share about the things in life that intrigue and inspire me. GAMES GAMES GAMES started because people asked Lisa to share many of the silly and fun games that are staples at her holiday parties.
View all posts by Lisa →
This entry was posted in Uncategorized and tagged etsy, lunch box, lunchbox, RoofTop Creations, scooby doo, thermos, Thrift Shop. Bookmark the permalink.

6 Responses to “I’m Picking Out a Thermos…..For You”